Canadian mine rescue team best in the world 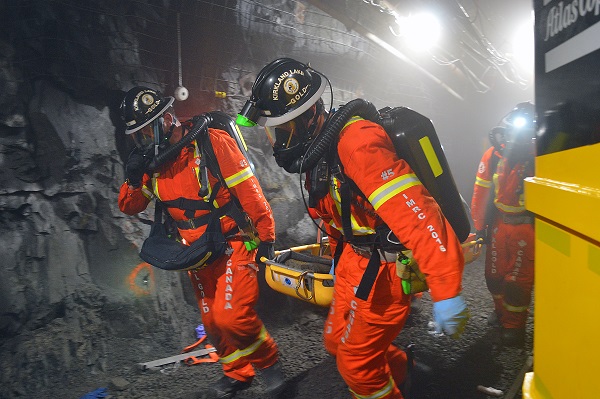 Mine rescuers from Kirkland Lake Gold were crowned world champions by Workplace Safety North and Ontario Mine Rescue as the overall winners of the 10th International Mines Rescue Competition (IMRC2016-Canada) at the closing ceremonies in Sudbury.

During the competition August 19 to 25, 27 mine rescue teams from 13 nations were evaluated on their firefighting skills, first aid response, high angle rope rescue skills, use of emergency equipment, and decision-making ability under stress in a simulated underground emergency.

The international competition, held for the first time in Canada, is organized every two years to provide an opportunity for mine rescue organizations to share and improve mine rescue knowledge and practices through global cooperation. Previous IMRCs have been held around the world including Europe, Asia, and Australia.

During the underground emergency scenario, five-member teams had to build a wall in a smoke-filled, heated environment to change mine ventilation due to a fire, and find two missing miners. One of the miners was found impaled on a length of rebar, further challenging teams’ first aid skills.

Compass Minerals Goderich Mine won the Theory event in which team members were tested on their knowledge of mine gases, firefighting, and emergency response activities.

“The 2016 International Mines Rescue Competition allowed the global mine rescue community to come together and share best practices in an extremely realistic environment," said Ted Hanley, General Manager of Ontario Mine Rescue at Workplace Safety North. "While the competition allowed some of the most highly trained mine rescuers in the world to test their skills, it also allowed teams from 13 nations to return home with leading-edge ideas, equipment, and procedures to help reduce the risk of underground mine rescue work."

IMRC2016-Canada was hosted by Workplace Safety North and Ontario Mine Rescue, and sponsored by Vale, Goldcorp, Glencore, KGHM, Draeger, Equivital, the City of Greater Sudbury, and the Northern Ontario Heritage Fund.

Competition and team photos are available for download and use at: www.flickr.com/photos/imrc2016