Working closely with current general manager Alex Gryska who plans to retire next summer, Hanley’s focus is assessing the administration of the provincial mine rescue program, as well as engaging mining companies and other stakeholders in strategic discussions to develop a roadmap for the next generation of the program. 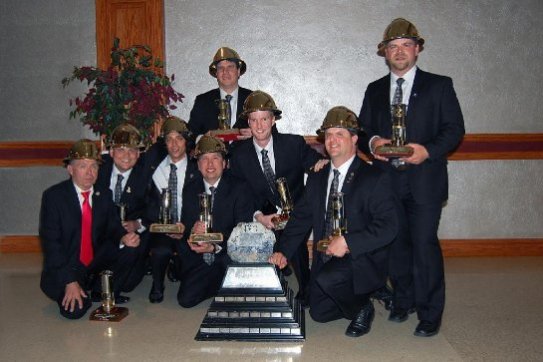 “Most people wonder why I got into mining and how I ended up in northern Ontario,” says Hanley, who was born in Thornhill, Ontario, and attended Queen’s University. “I studied engineering because of a desire to understand how things work. I found mining engineering represented one of the greatest – if not the greatest – engineering challenge. You’re building a skyscraper three kilometres underground, so the technical side of mining appealed to me."

Hanley had been an active volunteer with Ontario Mine Rescue since 2008, and a dedicated member of the mine rescue competition team at Glencore Kidd Operations in Timmins.

“What attracted me to Ontario Mine Rescue is the strength of its people and the specialized knowledge and skillset they possess. The program has a tremendous opportunity as one of the most highly-trained, specialized mine rescue organizations to be at the leading edge of mining emergency response.

“In terms of the future of Ontario Mine Rescue, the program is  going through transition, evidenced by the arrival of some new faces. We also have a lot of individuals using the word ‘retirement’ these days," he laughs, "which presents the challenge of maintaining that core knowledge base but also the opportunity for the program to grow and develop.”

For the past six and a half years, Hanley and his family lived and worked in Timmins. The position is based out of the Sudbury mine rescue office, so the married father of two is currently in the midst of moving the family to the Sudbury area. “My two daughters are four months and a year and a half, so my caffeine intake is way up,” he laughs.