I have seen many firms over the years try to implement a new system of safety that they were convinced was going to lead them to the Promised Land. This reminded me of the occupational health and safety accountability program that talks about the “magic pill” for safety improvement; the magic pill that will transform their safety program into something other firms will admire. Too often, people don’t realize that it isn’t the program you are initiating, but the effort you put into it that does the trick. Herein lies the story of Strathcona Paper and their road to “world class safety.” 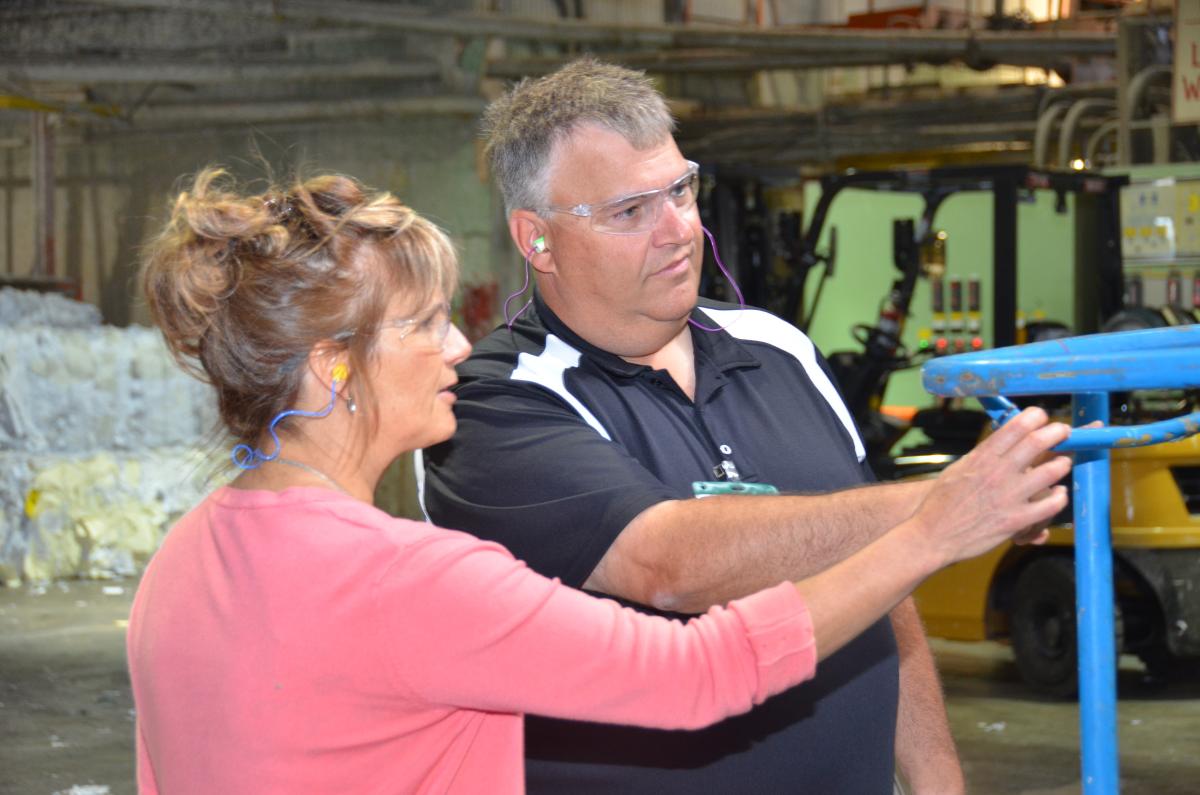 A decision that things needed to change

Strathcona Paper has seen some turbulent times over the years. In 2006, greater stability was achieved when Atlas Holdings acquired both Strathcona Paper and their sister company Boehmer Box in Southwestern Ontario. For the next several years, things were pretty much status quo for Strathcona until the parent company suffered two fatalities in their non-paper division in the United States. After these events, Atlas Holdings decided that things needed to change. In came the world class safety initiative – but was this just another magic pill? To answer that question, you’ll need to read on.

Beginning in 2010, the process focused on several items:

My involvement in this initiative dealt with the first bullet point: evaluate their current situation. I’ve been visiting Strathcona Paper for the better part of 15 years. One thing I picked up rather quickly was the divide between management and employees. As a unionized facility, things seem to revolve around labour-management issues regarding how well safety was working.

In a video interview with Workplace Safety North, Mark Sklar, President and COO, Strathcona Paper Company, said, “I think, for years, safety was seen – here at Strathcona – as the job of management to make it happen. And so most of the guys on the floor would wait for us to decide what we’re going to do next; make sure that management decides and executes any areas and changes that require ‘over and above’ safety attention.

We set ourselves an action plan

“Between 2007 and 2009, Atlas Holdings out of Greenwich, Connecticut, – they’re our owner – had actually two fatalities in a couple of their companies – not even in the paper industry – other companies, and our chairman, as you might expect, was extremely, extremely upset, and taken and moved by this," says Sklar. "Given that, he began talking about all of the Atlas companies striving for world class safety. So, in 2009, what we did is we actually pulled together a formal five-year safety plan – just like you have a business plan – we put together a five-year safety plan. We set ourselves objectives. We set ourselves an action plan.

“We felt the place to start was: ‘What are we doing today?’ So in 2010, this was really the first year – first full year – of the execution of our world class safety plans. We did a number of things: We’ve got annual shift safety meetings and – for the very first time – we actually had our hourly workers very involved in workshops. We put them in groups of six or seven people, where they would sit, and they had flipcharts, and as a group, they discussed at a very general level what we can be doing to improve safety at Strathcona Paper.

What’s not working and how do we change it? 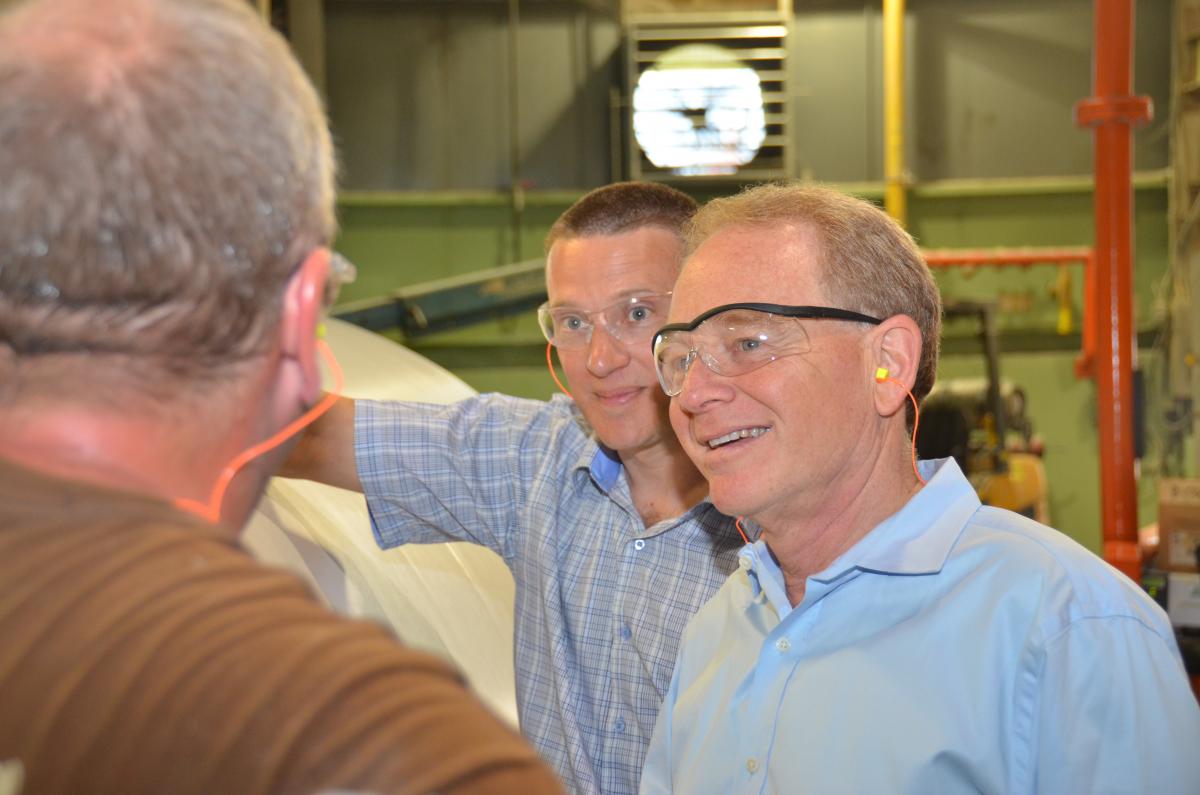 “Beyond that, our management team did an analysis of all the programs we currently had from a safety perspective: what’s good, what’s not working, and how do we change it? And then, finally, the other thing we did was a safety perception survey where we had well over – I think 85 of our hourly workers – participate in an independent survey in terms of their perception on how management handles safety, how safety is perceived at Strathcona, what we can be doing better, a whole number of factors. But we wanted an independent perspective on how everybody on the floor, as well as some of the supervisors perceived us to be. We put that all together and it really formed the basis for our 2010 world-class safety plan.”

I recall speaking to the Strathcona plant about conducting a Workplace Safety North system audit that looks at every aspect of the organization from a safety perspective. What made them apprehensive was one component of the audit: a safety perception survey of the workforce. In the end, it was a deal-breaker and Strathcona backed off. Seeing that there was some new ownership and a whole new road for them to be going down, I thought the standalone safety perception survey would be a great starting point for them.

Safety perception survey: What the employees say is reality

The late, great safety guru Dan Peterson used to say: Use a perception survey, in which you ask people in the organization at the hourly employee level what they think about the effectiveness of the organization. You ask the questions of people at different levels of the organization and then compare the responses. You find a tremendous difference of opinion among what management thinks, what supervisors think, and what the employees think. We believe what the employees say is reality. It tells you not only exactly where you are, but what you need to fix to get better tomorrow. That’s because you can identify those various areas within the safety system that they feel are working and those areas that are a waste of time.

In the early winter of 2010, I was asked to facilitate a session whereby we had all employees complete the WSN Safety Perception Survey; as well, employees, through their annual safety meetings, were given an opportunity to provide answers to the following questions.

Smaller groups were asked to record their answers on their flipcharts and report back to the entire group. This provided a hard copy of the answers so that management could take this information back and develop their five-year action plan. This plan was also to be reported to Atlas Holdings.

The safety perception survey results showed a somewhat better than average score with regards to all surveys completed to date. The Strathcona line is the solid red line, all firms to date is the dashed blue line. 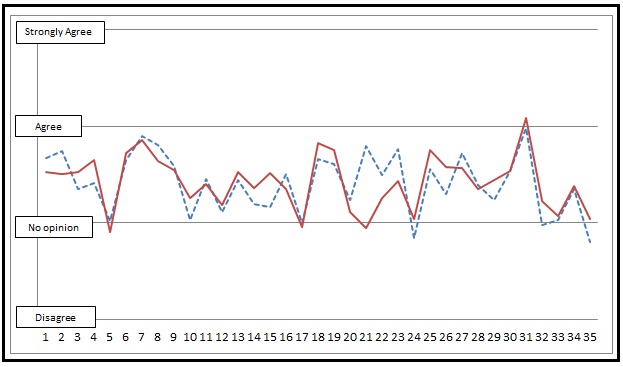 Largely, Strathcona’s results were equal to or better than the average. I provided a report to Strathcona based on my analysis and knowledge of the plant, and provided several recommendations that I thought would help them on the road to true world class safety.

Safety crossroads: The right way or the easy way?

So here we were, at that crossroads we come to in health and safety. The road to the left is a long and windy road that it not going to be easy, and the road to the right, it’s often not worth taking. This is where a lot of companies aren’t ready to take the hard road, they want something easy or don’t want to spend the resources, time, or money to do it right. 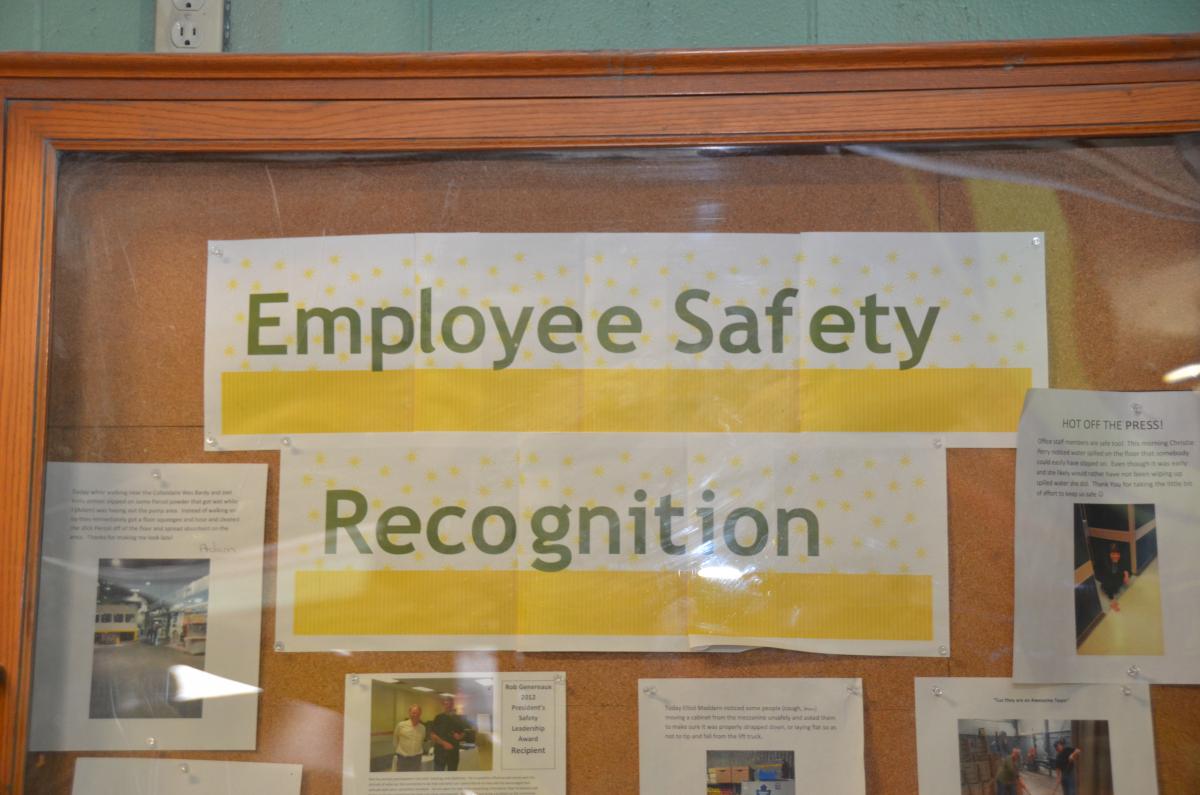 At Strathcona Paper, things were changing. Employee engagement and involvement has gone up immensely. Workers are taking a more active role in health and safety. Safety items identified by employees are being addressed and done so in a timely manner.

Safety drives all kinds of cultural change in the company

“Safety drives all kinds of cultural change as well, and we’re slowly getting our workforce more engaged in safety,” Sklar said in his interview. “They’ll come up to us and talk to us about things. I would say the shift safety meetings we had this past February were the most involved yet. So we are slowly getting employees to be more engaged.” 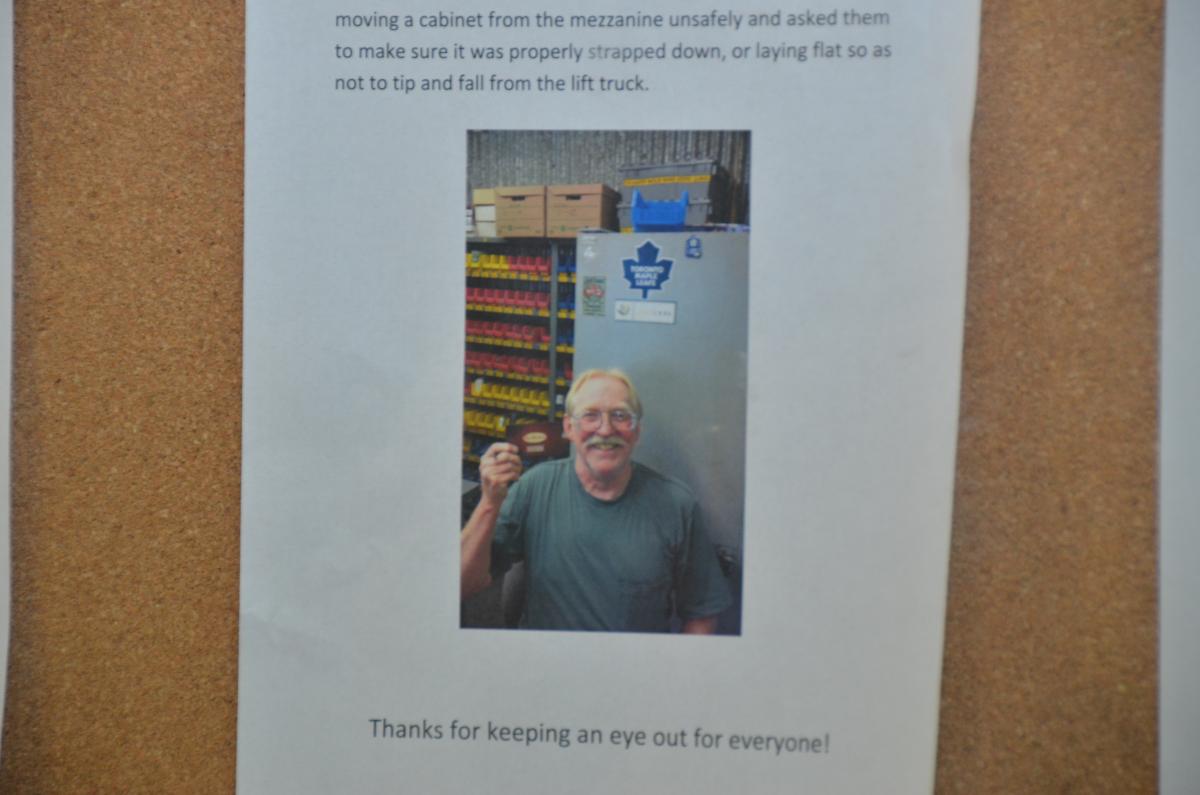 Projects were undertaken that didn’t really affect safety, but did affect the culture or the perception of management by the employees, things like, relocating employee entrances, renovating a lunchroom, washroom, and main cafeterias, improvements to training provided to employees; and ensuring that all training is effective. Operating procedures were developed and employees were asked to provide input into the procedures. Instituting a five ‘S’ housekeeping program (Sort, Set in Order, Shine, Standardize, and Sustain) was another step to improve the cleanliness of the plant and from a health perspective, air quality testing was conducted and recommendations were put in place to remove contaminants.

In 2013, I was asked to come back to facilitate another session as well as to complete another perception survey. This would be the first time we would be going back to redo a survey and we would get to see the change whether positive or negative from the original survey.

When I conducted the facilitation session in 2010, most of the other presentations were done by management staff at the plant (plant manager/safety person/HR manager). When I came to do my presentation in 2013, what a change! Most, if not all, of the presentations were now done by hourly employees. This was a significant change to see the workers taking ownership of the health and safety program. 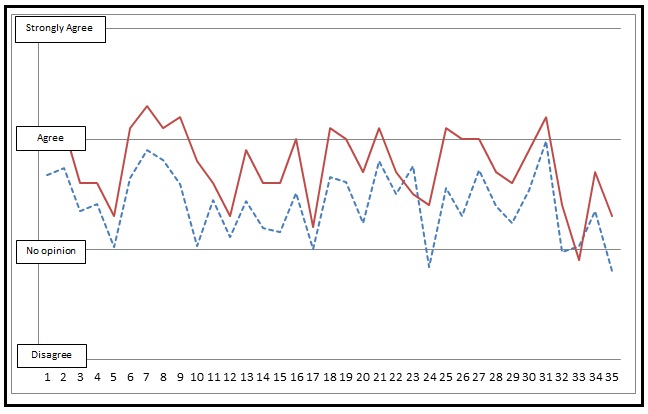 When the results came back from the follow-up survey, the improvement was incredible. Only two of 35 questions did not show a positive increase. Some questions showed an unbelievable increase in safety perception.

So with all the projects on the go, the decrease in the recordable frequency rate from year-to-year, and the improvement in the perception of the employees, it’s obvious that there has been a transformation at Strathcona Paper, a shift along that road to world class safety. 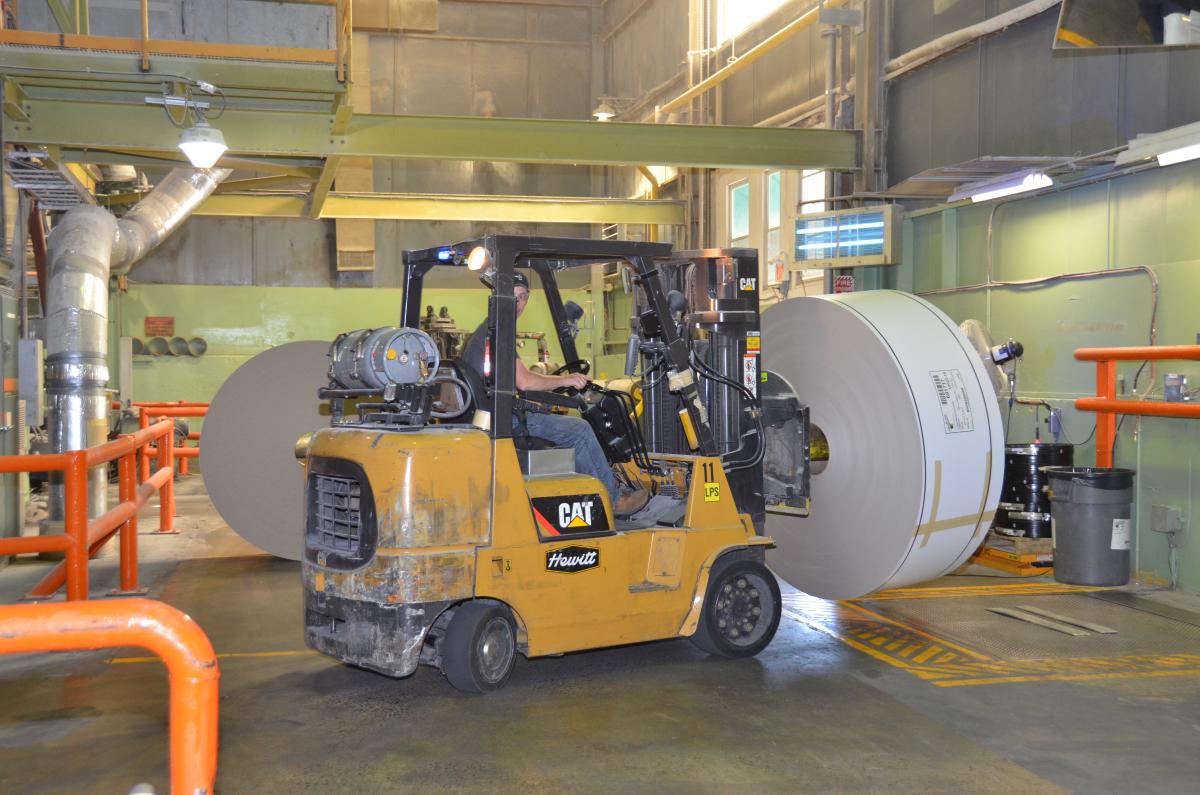 Where does Strathcona Paper go from here? They are not resting on their laurels. Although they have improved, they still have a ways to go on their journey world class safety. Incidents will occur, they know, but they believe they will get further and further apart due to the systems they’ve put in place.

“I think there’s been a mindset shift here, that, when someone on the floor sees something that’s a risk from a safety point of view, tell your supervisor,” Sklar summed up his thoughts during a video interview with WSN. “If I’m out on the floor tell me, or if Troy’s out on the floor, tell Troy. We want to act on those things that are potentially not safe.”

Watch the full video interview with President and COO of Strathcona Paper Company, Mark Sklar, as he talks about the company’s processes and experiences.

Jerry Traer, Program and Training Specialist, has been with Workplace Safety North, and its predecessor, the Pulp and Paper Health and Safety Association, for more than 10 years. His background includes 20 years with in one of the largest pulp and paper plants in the world, as well as a certificate in Pulp and Paper Technology from the Northern Alberta Institute of Technology. With extensive training from the Workers Health and Safety Centre, training in process hazard analysis and risk assessment, as well as his Certified Registered Safety Professional designation, Jerry has made numerous presentations at safety conferences across Canada, and sits on two Canadian Standards Association technical committees, Confined Space and Risk Assessment. He works closely with all firms in pulp, paper, corrugated, and other related industries in Toronto East and Eastern Ontario.