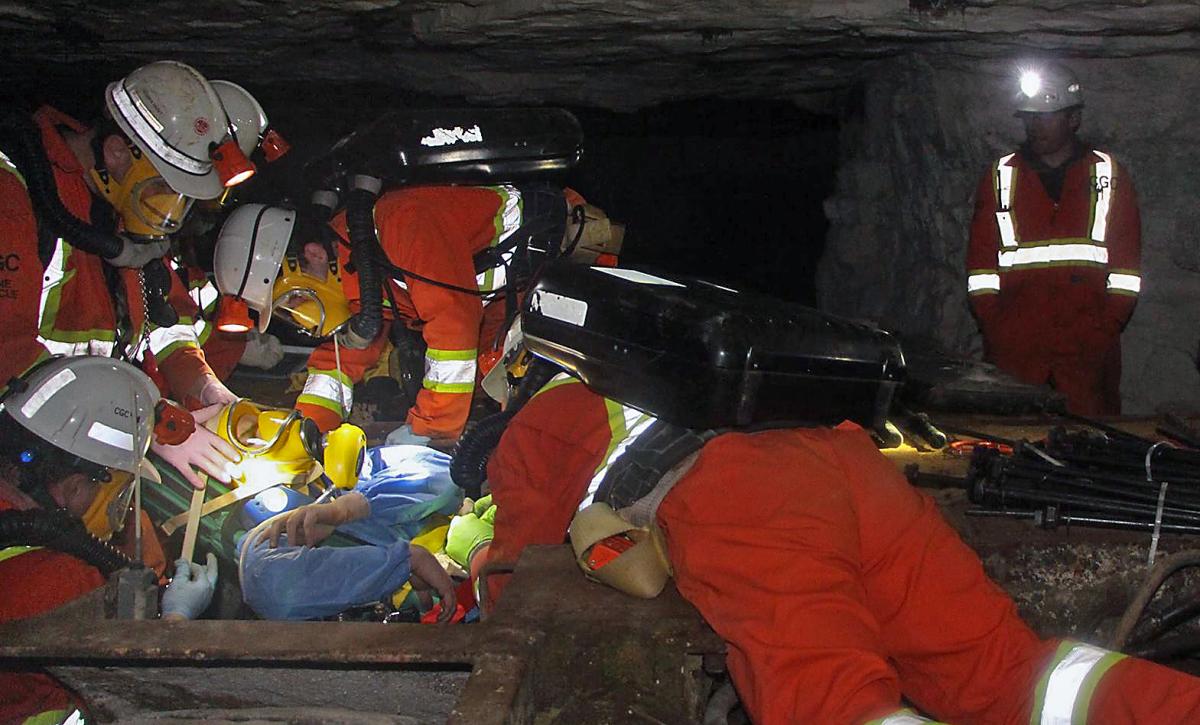 The Canadian Gypsum Company (CGC) is giving their Hagersville staff and mine rescue team high marks for their response to a full-scale functional fire drill late last year.

“Absolutely, it went really well,” said mine manager Mark Horner, of the December drill, kept secret from all workers, except Horner and plant manager Steve Forcier, until the approximately four-hour exercise ended.

The drill highlighted the fast response time of staff to the alarm, and the effectiveness of the mine rescuers, Horner said. “It was just very apparent our guys have gone through the extensive training they have, and that in the event of a worst-case scenario or any type of emergency, our people will be able to respond very effectively.”

Planning for the full mock scenario began in October. Forcier and Horner “talked a little bit about how we wanted to do it, who would be involved, and what location we could do it in the mine so it would seem like a real-life thing; it would be plausible.”

District Mine Rescue Officer Dan Rulli and senior Ontario Mine Rescue officials were consulted, as was senior company management who were supportive.

“Then we started talking about the plans, and what equipment we might need” between ourselves and from OMR to make it run smoothly, Horner said.

“We did a pretty good job of keeping it under wraps. Forcier and myself, we kept it between ourselves. No one [else] knew it was a drill until right at the very end,” said Horner, who at the last minute recruited former mine rescue volunteer and mine technician Ian MacDonald to simulate “starting the fire” and be the sole casualty.

“I pulled him to the side in the morning and let him know what our plan was, and he was very excited to run it, so I knew he wasn’t going to be giving a wink to anybody.”

As mine technician, MacDonald travels throughout the mine, so his presence at any place in the mine or his absence during a roll call would seem reasonable. He was given a smoke machine, several smoke bombs, the general area to situate the “fire”, and instructions “to hang out there until they come and find you.”

Once the alarm went out at about 10:30 a.m., things happened quickly, said Horner, who put together a control group with available staff. Within 20 to 30 minutes, “we went through the information that we had, and through the roll call lists of who was underground, and quickly established who was in the different refuge stations, and that Ian was missing.”

“It took about 30 minutes for the team to be assembled under oxygen, and for us to have a solid plan, and what we thought was a good spot to start looking. Then it took approximately 40 minutes for them to locate him.”

The first team to go underground was led by Captain Chuck Taylor and was supported by Briefing Officer Aaron Constable. Both stepped up into key positions, worked well together and ensured the safety of the team, said Horner. The team included: #2 Man Jim Winkworth, #3 Man Matt Peebles, #4 Man Darren Martin and Vice-captain Tony Morris.

MacDonald, who feigned breathing difficulties and semi-consciousness, was not fully responsive to the team.

“He had a lot of praise for the team that responded to him. He said he was packaged up in under 10 minutes, loaded on our personnel carrier, and headed to surface very quickly.”

The biggest challenge encountered during the functional drill was “the amount of [manpower] resources used to run the scenario,” Horner said.

“We essentially shut down production from the mine for the majority of the day,” he explained. In addition, surface operations were curtailed because “there’s a lot of [mine rescue] volunteers from the different surface departments that are at our plant,” and once the drill was underway, contractors were sent home.

But “I think it was definitely a beneficial thing to do,” Horner said. The results underline the confidence in the mine’s emergency response plan, the quick response of all staff to the alarm, and the speed and quality of the mine rescue response.

And the drill indicated two areas for improvement.

“Our leaky feeder [radio] system is spread a little thin” over the expansive mine, he said. “The radio quality is something we’re looking to improve, so we have a solid communication line in the event of an emergency.”

And with so many mine rescue volunteers from surface operations, “we would definitely benefit from having some more specialized mine [familiarization] training for those volunteers.”

Horner is confident that the plant, which does two fire drills a year, will do more full-scale drills.

“I think the only way you can really test your mine rescue response, and test your procedures, and how it’s all going to work is by doing a real scenario.”