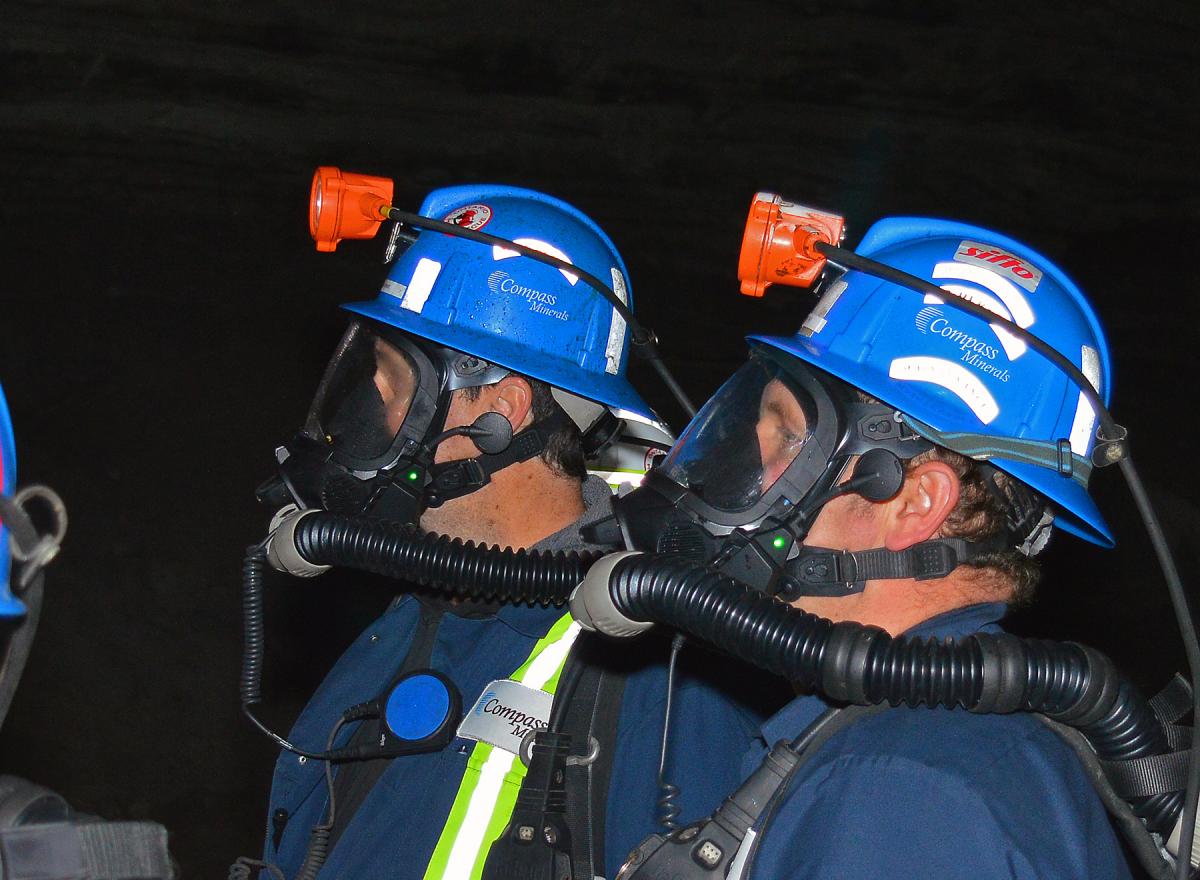 At first volunteers are reluctant to put the entire unit in soapy water to disinfect them, said Dan Rulli, Southern District’s Mine Rescue Officer, but they have been washed and heat-dried several times, as well as covered in firefighting foam, and should see much rougher conditions and treatment before the evaluation period is ended.

The pilot project is a result of growing concern over the quality of communications and the potential hazard poor communications presents to a team during an emergency mine rescue response. While the communication infrastructure in mines varies, Ontario Mine Rescue wants to eliminate any communication difficulties caused by mine rescue equipment, policy or procedure.

Draeger says the FPS 7000 facemask and the FPS COM communications module, which includes a diaphragm and amplifier, is submersible in water, has a wide field of vision, and does not fog. The facemask, though relatively new to mine rescue uses, is already in use with fire departments.

“It definitely felt easier breathing,” and communications with the team was easier, said Pete Kohnert, a 20-year veteran mine rescue volunteer at Compass Minerals’ Goderich Mine, following a recent training session with the units.

“It should be really helpful in smoke and noisy conditions,” Kohnert said.

Voices seemed clearer and more audible with the unit, and visibility with the facemask was also better, said mine rescuer Matt Drennan. The fit and weight is slightly different from the Panorama Nova mask currently used, he said, and will require some time to get used to.

The Panorama mask has caused difficulty not only while speaking into phones and radios, but also during inter-team communication.

Kohnert, acting as captain, and Drennan, acting as vice-captain, each wore a FPS 7000 with the communication module for several hours during an underground exercise as their team travelled by foot and vehicle in the cavernous salt mine to spray foam from the compressed air foam system on a “fuel spill.”

The communications module features a mechanical speech diaphragm and a voice amplifier with speakers on the left and right side of the mask, as well as an earpiece and hardwire link to a handheld radio.

Rulli told the volunteers that the units will not improve a mine’s leaky feeder radio system – dead areas will still be dead areas – but should improve the ability of the captain and vice-captain to communicate to the team, as well as their ability to hear radio communications from the briefing officer.

“I wanted to experiment, but didn’t have much time,” said Drennan, who nonetheless gave the unit a thumbs up based on his brief appraisal time.

Kohnert agreed. “I think it’s a good idea. It certainly serves a purpose.”

After the exercise, Drennan and Kohnert completed an evaluation form asking them to describe the environmental conditions; to rate various comfort and wearability factors, such as weight and air flow; to rate different communication module functions, including volume and hardwire connections; and a series of questions on performance and practice.

Though only the captain and vice-captain in exercises wear the units, non-wearers are also asked to complete the evaluation, Rulli said, noting that not only their ability to hear communications, but their opinion on how the units could be incorporated into mine rescue practices and procedures, is important.

The two trial units are now in Kirkland Lake District for further evaluation. A report based on the evaluations will be presented to the Ontario Mine Rescue Technical Advisory Committee to determine if the units meet the requirements of the mine rescue program.