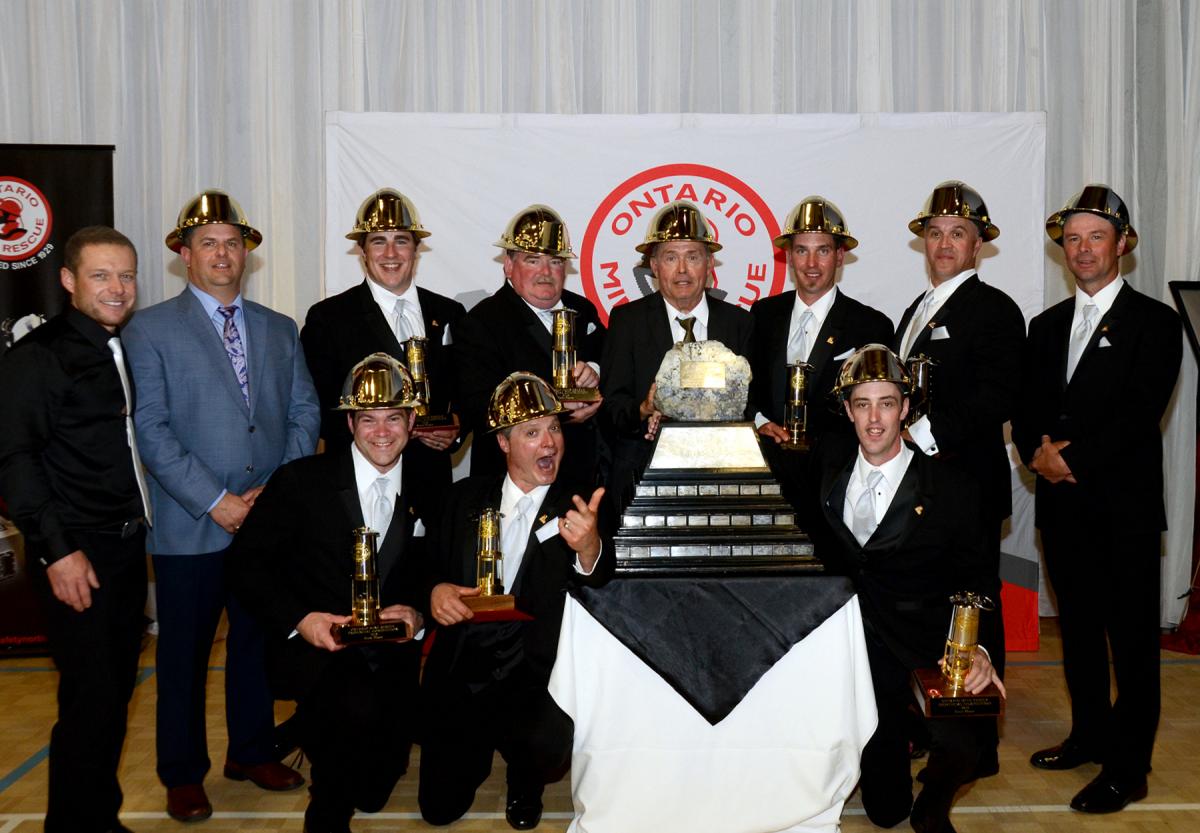 Tahoe Canada’s mine rescuers from Timmins West and Bell Creek mines thought they were going to get a pat on the back for winning the 2018 Ontario Mine Rescue Provincial Competition in June, but the pat on the back came in the form of a challenge – the 2018 International Mines Rescue Competition (IMRC) in Russia.

The provincial champions are the only Ontario team – and one of two Canadian teams – defending our title as reigning international champions at the 11th IMRC in Ekaterinburg, Russia, Sept. 22 to 29. Twenty-eight teams representing 12 nations will participate in the biennial event.

The decision to send the team was made the week after the provincial competition, said Jordan Vince, Tahoe’s director of health and safety.

“Management was discussing how well the team had done,” he said, winning the Timmins District for three consecutive years and now the provincial. “As a recognition point for everyone who had participated, the next level would be getting the guys to compete on an international level, and of course, to see how they do in that kind of environment.”

“They arranged a teleconference meeting because everyone was back to work,” said Adam Weagle, Tahoe Captain. “They said the new CEO wanted to congratulate all of us on the phone. When we all called in, Mr. Dave Bernier (Bell Creek Mine manager), Mr. Jordan Vince, and Mr. Peter Van Alphen (vice president of operations) told us that it was all a fake, that the reason for the phone call was that we were all heading to Russia.”

It was a shock to the team, said Weagle, but “it was a nice shock. It was six in the morning, so it was nice to wake up to.”

“This was an opportunity for everybody to try something out of their comfort range,” said Vince, pausing to add “which will definitely be true.”

Ten-member team get passports in order

The early onus has been on the 10-member team, he said, which will consist of the same eight participants as at the provincial, plus coach Jim Davis, and a technical translator.

“Luckily we’re diverse enough in our company we have access to folks who do speak fluent Russian and are in the mining industry,” said Vince, who will join the expedition with Timmins District Mine Rescue Officer (MRO) Danny Taillefer as co-facilitators and cheering section.

“A few of our guys haven’t had passports, I give them a lot of credit, they’re anxious to go and participate and be a part of something . . . and they’ve stepped to the plate and got their passports, I think, in record time,” Vince said.

Weagle said the team did not need any encouragement.

“All the boys are pretty excited about it. We’re thankful for the opportunity and looking forward to it,” he said. “We’ve all started a workout regime. We’re all studying. We’re all strategizing.”

Davis is already conferring with the district MROs, as well as Ontario Mine Rescue officials Ted Hanley and Shawn Rideout, competitor organizers of IMRC2016 in Sudbury, but training together as a team will not begin in earnest until about two weeks before leaving for Russia, Weagle said.

“But I think they’re (management’s) trying to get us a couple days in August, which is pretty generous. We’re all on different shifts, so they’re missing out on manpower no matter what day they pick. We’re pretty fortunate.”

Learning from the best in the world

The benefit, said Vince, is the opportunity for the team to expose themselves to, and test themselves in, a completely different environment, different rules, different teams from different jurisdictions.

“It’s also those variable aspects that mine rescue is famous for, that you can never plan for and this is one of those things that adds another element of preparation, and mental and physical readiness that the team has to account for,” he said.

During the provincial competition, Weagle said, “we were fortunate to stay in the same hotel as the team (Boliden Tara) from Ireland. . . it was cool to pick their brains on how they do things. They were picking ours to see how we do things.”

Still it’s a competition, and Weagle’s outlook is that of a competitor. “I’m hoping to go over there and take the whole thing.”