Under the research microscope: Communication project latest research effort for mine rescue

Mine rescue may be coming out of the obscurity of anonymity under the microscope of scientific research.

A recent keynote presentation to a German conference of psychologists on how Ontario mine rescuers communicate drew a high level of interest, said Dr. Mary Waller, a professor of organization studies at the Schulich School of Business at York University.

The hour-long presentation did not include any data or analysis on the project, but reviewed Dr. Waller’s previous research in team dynamics and outlined the process and methodology of the mine rescue team research, she said.

“I told them about the research design and the data being collected,” Dr. Waller said. A separate, but extensive question and answer session on the mine rescue research followed, attended by the German media.The three-year project into communications in dynamic, non-routine situations, is the one of the latest and most high-profile research efforts involving Ontario Mine Rescue.

The presentation at the conference, principally for industrial and organizational psychologists interested in applied psychology, drew significant interest because what is learned from this project will be applicable to situations in other industries, Dr. Waller said.

“Everyone in the academic community is very excited by it,” said the York professor, who collected the first round of data by audio recording of participating team members as they worked during this year’s provincial competition.

“Ontario Mine Rescue is like the icing on the cake for me. It is the most complex team setting I have ever studied.” Previously Dr. Waller has researched communications and team dynamics in aviation flight crews, nuclear power plant control room crews, military crews, trauma teams, port and harbor operations, and even a terrorism response operation. 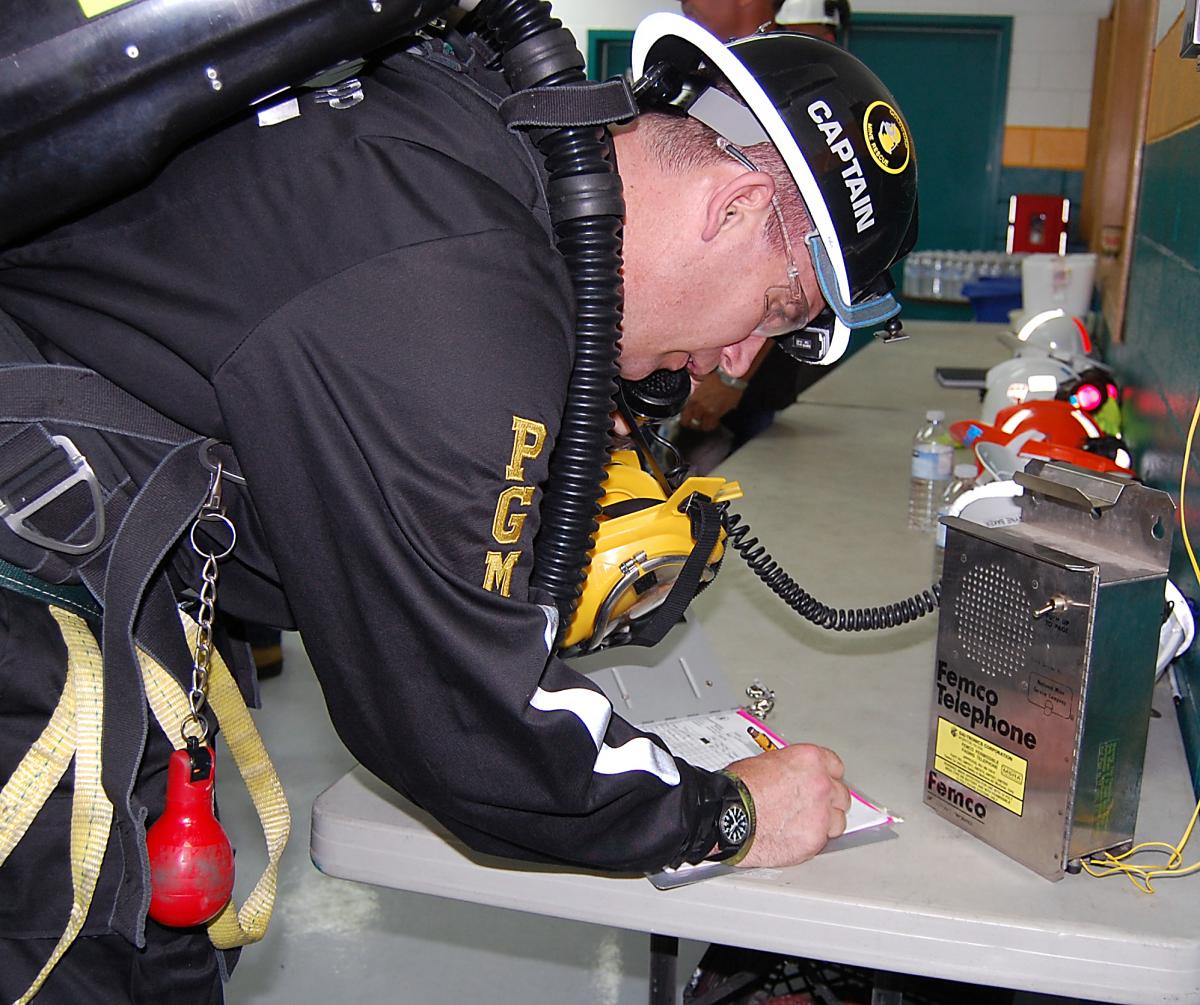 Mine rescue research is unique because the teams have a more complex routine to go through under time constraints and in a simulated harsh environment, Dr. Waller said. “They not only need to perform an activity, they also need to get together to problem solve.”

“They switch back and forth in communication patterns between problem-solving versus short staccato action commands,” she explained.

By the time the project is finished in 2014, there will be enough information to research beyond basic team dynamics and communications, and explore the relationship between captains and briefing officers, captains and vice-captains, and other team relationships, Dr. Waller said.

During the June competition, USB key-sized micro-recorders were placed under the rim of each participant’s hard hat. The researcher purchased software that synchronizes the recordings to create a master recording for each team, and now the recordings are being reviewed to identify and code the communication – information, commands, questions, affirmations, clarifications, etc.

The results will be analyzed by a computer using a pattern recognition algorithm to identify and analyze the differences in communication patterns between high- and good-performing teams. While one year’s competition is enough data to begin analysis, “We need a larger sample size for finding statistically significant results,” she said.

“When your sample size increases, you have more power, like using a more powerful microscope. You can see more subtle effects.”

Dr. Waller will collect additional data at the 2013 and 2014 provincial competitions, and tentatively plans to attend next year’s Sudbury and Timmins district competitions to increase the sample size. She expects to have the results from 30 or more teams by the time the data gathering is finished.

In the meantime, Dr. Waller is already booked for two more presentations in 2013, one to an informal gathering of international researchers and a second in October at the International Mines Rescue Bodies conference in Niagara Falls.

“I think people are going to be so fascinated by Ontario Mine Rescue.”

2005 – Mirarco and OMR conduct research into using virtual reality as a decision-making tool during an emergency.

2009 – Drager Safety Inc. and OMR volunteers pilot test the FPF 7000, a new hydration face mask for use with the BG4.

View the original article in the Ontario Mine Rescue newsletter Link Line.