Workplace health and safety snapshot for Ontario logging sector in 2018 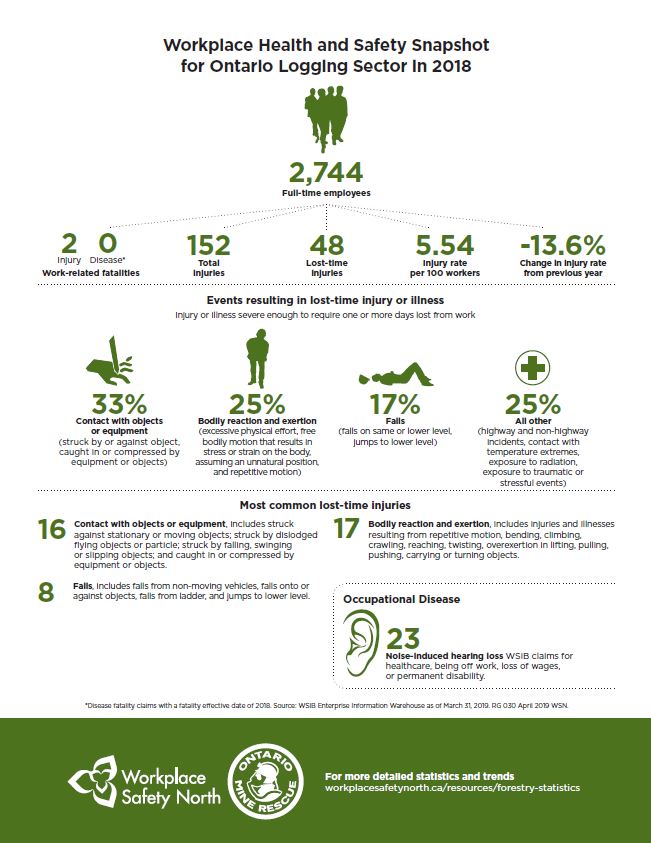 The most recent workplace health and safety snapshot for the Ontario logging industry shows two fatalities and more than 150 injuries for its 2,744 full-time employees.

“In 2018, the most common injuries causing a worker to lose time off the job included pains and strains, coming into contact with objects or equipment, and falls,” says Tom Welton, Director of Prevention Services and Education Programs at Workplace Safety North (WSN).

“A fatality last year was impacted by a partial lockout of energy sources. It’s important to remember that it’s necessary to block any raised attachments to prevent unplanned movement. We always stress the importance of locking and tagging out all energy sources during maintenance or repairs on machinery,” says Welton.

“Noise-induced hearing loss is the primary occupational illness within this industry, and it can creep up over time. Workers are strongly encouraged to always wear hearing protection when appropriate,” adds Welton.

The Ontario logging sector – both conventional and mechanical logging – continues to be a high-risk sector and has one of the highest fatality rates in the province. In the past nine years, there have been 15 traumatic fatal injuries.

1. Worker sustained crush injuries when a tree being delimbed rolled over him.

2. Worker sustained crush injuries when a raised attachment, which was not blocked, fell to the ground during maintenance.

4. Worker struck and killed by a chicot that had been dislodged by a skidder.

5. Millwright fatally injured when he was struck by a loader in a mill yard.

6. Worker died after climbing into the back and getting lodged in the moving auger of a sanding truck.

7. Cutter-skidder operator was felling a large tree and as the tree began to fall, the top broke off a nearby chicot which fell and fatally struck the cutter.

8. Double fatality occurred when an excavator attempted to pull a logging truck out of a ditch; it slid on the incline of the ditch and fatally pinned two workers who had been standing nearby.

9. Worker fatally struck by a falling tree while clearing a path for a skidder.

10. Worker driving a tractor-trailer fatally injured following a crash with a tanker truck. There was dense fog at the time.

11. Skidder operator fatally injured when he was struck by a falling tree while pulling logs from the bush.

12. Tractor-trailer collided with a pickup truck that was turning left off a highway, fatally injuring a young worker.

14. Worker fatally struck by a falling tree that a skidder was attempting to push down.